News:
Fondazione di Ricerca Scientifica e Umanistica Antonio Meneghetti - A Swiss no-profit Foundation in Special Consultative Status with Economic and Social Council of United Nations
In 2015, ECP reached its XIVth edition, and it was Italy and her dynamic city Milan to host the event at the Università Milano Bicocca from 7 to 10 July, under the auspices of the European Federation of Psychologists’ Associations (EFPA). The Foundation organised a symposium on the theme “Improving social well-being and sustainable development: the United Nation Agenda beyond 2015”, where an evidence of a tangible form of implementation of the Millennium Goals (MDGs) was brought in the Centres wanted and created by the founder of Ontopsychology, Professor Antonio Meneghetti.

The experiences at Lizori and Marudo in Italy, as well as other experiences in Russia and Latvia, showed the attendees that ecosustainability is not just a need of our society, it is also a request that can be tangibly responded to. Lizori, Marudo, Diostan, Lizari were all derelict and neglected places which turned into marvelous cultural centres, true examples to follow, shaped following the highest humanistic values, created and lived under the sign of those values of ecobiology and sustainability, interculturality and integration, support of private endeavour, of art and interdisciplinarity, of young people and innovation, all coinciding with the UN’s goals. A formative model to replicate. 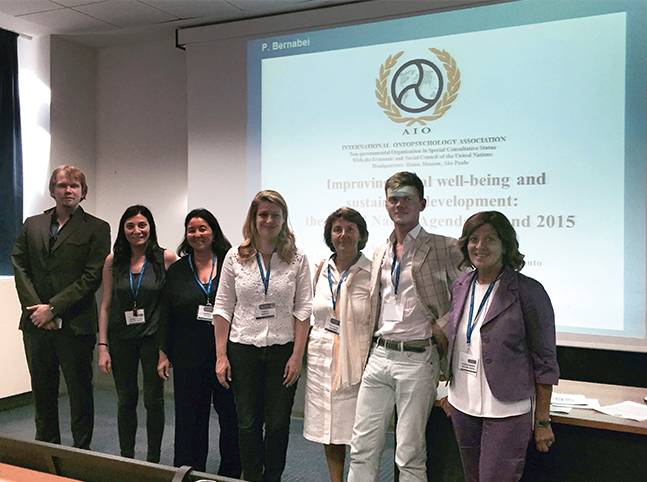 The symposium “The educative function between family and social responsibility” treated the role of educators and the need to promote a responsible pedagogy. Pedagogy is the art of assisting or leading the child toward self-realization and must therefore push toward the promotion of an education that can help and stimulate the individual to the knowledge and to develop one’s identity, to be functional to him/herself and consequently be able to contribute to the social context in which s/he lives and works. Besides the two symposia, AIO, in collaboration with AEO, has presented seven individual works, four of which were spoken presentations, while the other three were posters. Each of the seven works illustrated diverse aspects of the scientific model expressed by Professor Meneghetti; some of them included some applications of ontopsychological science.